The Electronic Cigarette: A Brief History

The electronic cigarette has had a relatively short life but has made tremendous headway during its brief existence. Tobacco and cigarettes have been around for literally centuries, so changing people’s perception of tobacco and nicotine has taken some work. Electronic cigarettes, or e cigarettes, were created as a healthier alternative to standard cigarettes, and to serve as a tool to curb the smoking habit.

Herbert A. Gilbert, a US-based inventor, was first to put the idea forth in the early 60s. He patented the “Smokeless Cigarette” in 1963. However, the idea did not truly catch on until 2003, when Hon Lik, a pharmacist based in China, introduced a modernized version. The early 2000s saw many business and companies going “smoke-free,” so the necessity for a cigarette that adhered to these new rules was high. Soon, the electric cigarette also became an avenue for slowly lowering a person’s addiction to nicotine. The popularity of the electronic cigarette has continued to increase, as they have gone from being recognized as simply smokeless cigarettes, to being seen as tools for improving health. 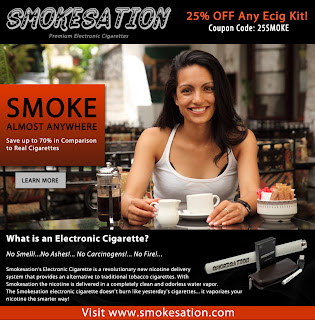 Posted by Smokesation at 5:39 PM