Smokesation's out and about this weekend!!

Looking to try one of our electronic cigarette kits for yourself before the holidays? We will be at the following gun shows in South Carolina, North Carolina and Virginia so if your in the area be sure and stop by and try our products!!

We look forward to seeing you at the shows!! 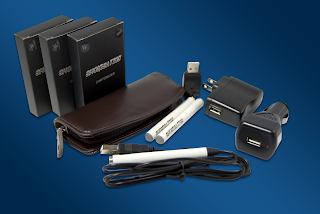 Posted by Smokesation at 1:27 PM No comments:

A study published in a Canadian journal concluded that smokers who take Chantix, one of the most popular smoking cessation drugs, could increase their risk of heart problems.
Chantix (varenicline) could raise the risk of heart attacks and irregular heartbeats, said one of the study authors, Dr. Sonal Singh, an assistant professor of general internal medicine at the Johns Hopkins University School of Medicine.
The heart problems are the latest in a growing list of concerns raised by patient reports, lawsuits and studies since the drug's approval in 2006.
The drug could cause changes in behavior, hostility, agitation, depressed mood, suicidal thoughts or actions, according to its warning label. Chantix carries a boxed warning -- the U.S. Food and Drug Administration's most restrictive safety labeling -- because of the risk of psychological events.
Chantix has been banned by the Federal Aviation Administration for pilots and air-traffic controllers because it may cause loss of consciousness and blackouts. Truck and bus drivers are also not allowed to take the drug.
In the study published in the Canadian Medical Association Journal, researchers examined data from clinical trials involving 8,216 healthy people who received either Chantix or a placebo.
Taking Chantix was associated with an increased risk of serious heart problems. These events were reported in 52 people out of 4,908 (1.06%) who took Chantix, compared with 27 of the 3,308 participants (0.82%) who took the placebo.
While the difference on its face appears to be 0.24%, the researchers calculated the actual risk to be 72% using a statistical method that's applied when evaluating multiple studies. Singh and the authors analyzed data from 14 previous studies. They calculated the risk for each study to arrive at 72% as the overall weighted risk.
To see in detail how the authors calculated the statistic, see Figure 2 on page 6 of the study
Chantix raised a smoker's baseline risk of having heart attacks, congestive heart failure or other problems such as irregular heart beat, Singh said.
"The use of varenicline among tobacco users was associated with a 72% increased risk of serious adverse cardiovascular events," the authors wrote.
When quitting smoking, "you want to decrease your risk of a heart attack, instead of increasing a heart attack by 72%," Singh said. Their study was funded by the National Center for Research Resources, a component of the National Institutes of Health.


Posted by Smokesation at 7:31 PM No comments: